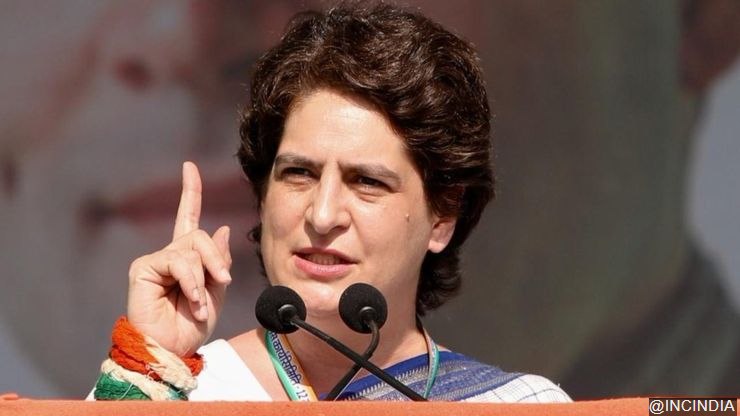 Sunday, 18 July 2021 (17:18 IST)
Lucknow: Congress general secretary Priyanka Gandhi Vadra on Sunday claimed that her prime goal in the 2022 assembly polls in Uttar Pradesh was to defeat BJP and categorically said that her party was not averse to any pre-poll alliance with protecting the party's organisation set up.

"Defeating BJP is our top priority. We are working with open mind and has a focussed view on it but alliance is also an option," she said while interacting with journalists at an informal breakfast chat at the residence of UP Congress media chairman and former state Minister Nasimuddin Siddiqui here on Sunday.

However, she said that her party was already giving final touches to the first candidate list, which is likely to made officials by August-end or early September.

"I will be focusing more time in UP now. Will be visiting regularly Lucknow and other cities in the state from next month," Priyanka said.

"I have to share my work between Delhi and UP, as I have responsibility of several national level work too," she said.

However, the Congress leader refused to make any comment whether the Party will project any leader as CM face in UP the assembly polls.

Elaborating about the pre-poll alliance policy of the party, she said," We have learnt our lessons from 2017 alliance experiment, this time the alliance if happens will be more structured and it will not be at the cost of our organisation".

The Congress general secretary said that already the party organisations have been formed at the nyay panchayat level and now it will be taken up to the gram panchayat level before the assembly polls.

Earlier on Saturday, she clearly said in a meeting at the party's state headquarters that the goal of the Congress is to defeat the BJP in the 2022 Uttar Pradesh assembly elections. Congress will go to any extent to achieve this goal, will make a political alliance with anyone, she informed the party workers and leaders.

Vadra was expected to return back to New Delhi this afternoon after attending a couple of meetings.

During her three days visit to Lucknow, Ms Vadra sat on a dharna against the UP government at GPO for panchayat poll violence on Friday while on Saturday, she went to Lakhimpur Kheri to meet the woman, who was manhandled during block Pramukh elections.

During her stay, the Congress general secretary also held series of meetings with leaders and workers. (UNI)