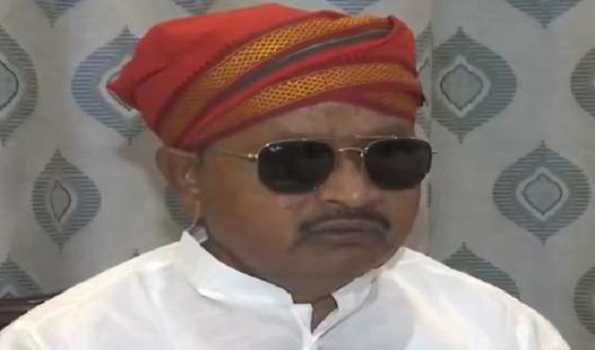 Friday, 3 September 2021 (15:28 IST)
New Delhi: Janata Dal-United leader and Bihar MLA Gopal Mandal was spotted roaming in his undergarments while travelling on a train on Thursday.

In a video going viral, Gopal Mandal can be seeing travelling from Patna to New Delhi on the Tejas Rajdhani Express.

According to reports, a heated exchange took place between the MLA and a few passengers who were travelling in the same coach.

Here is how @JanatadalU MLA is seen roaming around in the AC coach of Tejas Express from Patna to Delhi…When MLA Gopal Mandal was objected to by passengers, he threatened to shoot them! ?????? ?? underwear ???? ???!!! pic.twitter.com/K8Xr3aWNRw

When co-passengers objected to his behaviour, Mandal allegedly created a ruckus, abused them and also threatened to shoot them.

The Railways Police Force RPF and the ticket examiner had to step in and he was then shifted to another coach of the train.

In his defence, Gopal Mandal said, "I was only wearing the undergarments as my stomach was upset during the journey."

He claimed that there was no woman present in the compartment at the time he walked past to go to the toilet.

#WATCH I was only wearing the undergarments as my stomach was upset during the journey: Gopal Mandal, JDU MLA, who was seen in undergarments while travelling from Patna to New Delhi on Tejas Rajdhani Express train yesterday pic.twitter.com/VBOKMtkNTq

Mandal is MLA from Gopalpur in the Bhagalpur district of Bihar. (UNI)

"If centre is reluctant to caste census...": Nitish Kumar hints at state-level plan