These bacteria, fungi or viruses, can cause meningitis 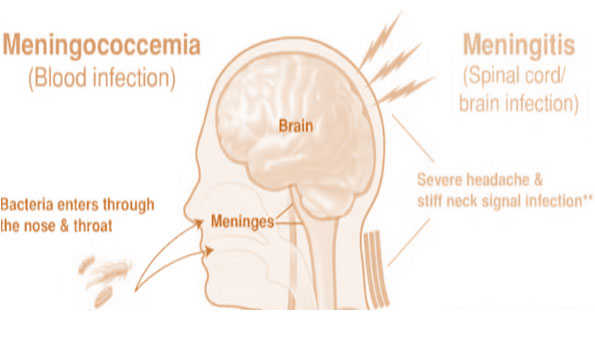 Sunday, 4 February 2018 (18:40 IST)
Kolkata: A variety of organisms including different bacteria, fungi or viruses, can cause meningitis.Meningococcal meningitis, a bacterial form of meningitis, is a serious infection of the meninges that affects the brain membrane. It can cause severe brain damage and is fatal in 50 per cent of cases if untreated.
Meningococcal meningitis, caused by Neisseria meningitidis bacteria, is of particular importance due to its potential to cause large epidemics. Twelve types of N. meningitides, called serogroups, have been identified, six of which (A, B, C, W, X and Y) can cause epidemics.

Meningococcal meningitis is observed in a range of situations, from sporadic cases, small clusters, to huge epidemics throughout the world, with seasonal variations. The disease can affect anyone of any age, but mainly affects babies, preschool children and young people.

The geographic distribution and epidemic potential differ according to the serogroup. There are no reliable estimates of global meningococcal disease burden due to inadequate surveillance in several parts of the world.

During the dry season between December to June, dust winds, cold nights and upper respiratory tract infections combine to damage the nasopharyngeal mucosa, increasing the risk of meningococcal disease. At the same time, transmission of N. meningitidis may be facilitated by overcrowded housing. This combination of factors explains the large epidemics which occur during the dry season in the meningitis belt.

Neisseria meningitidis only infects humans; there is no animal reservoir. The bacteria are transmitted from person-to-person through droplets of respiratory or throat secretions from carriers. Smoking, close and prolonged contact – such as kissing, sneezing or coughing on someone, or living in close quarters with a carrier – facilitates the spread of the disease. Transmission of N. meningitidis is facilitated during mass gatherings (recent examples include the Haj pilgrimage, and jamborees).

The bacteria can be carried in the throat and sometimes overwhelms the body's defences allowing the bacteria to spread through the bloodstream to the brain. It is believed that 1 to 10 per cent of the population carries N. meningitidis in their throat at any given time. However, the carriage rate may be higher (10 to 25 per cent) in epidemic situations.

The average incubation period is four days, but can range between two and 10 days. The most common symptoms are a stiff neck, high fever, sensitivity to light, confusion, headaches and vomiting. (UNI)

Crop pesticides can cause health hazards

Depression, you should be in the asylum of yoga